A collection of tools for interactive analysis of neuroimaging data

The batch system, specialized for second-level neuroimaging data analysis, is in CANlab_help_examples repository.

See batch workflow for a walkthough of the batch scripts. The walkthrough is also presented below.

This page describes a system of batch scripts located in the CANlab_help_examples repository, in the Second_level_analysis_template_scripts folder. The batch system is designed to facilitate second-level analysis across a series of activation estimate or contrast images from a group of participants. This provides a lightweight dataset with a set of standard analyses that can be used in publication, shared, and archived. The scripts are designed with the following values in mind:

Simple (alternative) batch system: Also, there is a very simple set of batch scripts suitable for other analytic purposes in the CANlab_help_examples repository, in the Canlab_simple_image_load_prep folder. This uses the same philosophy of defining a clear path to re-load saved files with standardized variable names, but is simpler and much more bare-bones than the full batch system. It can be useful when prototyping new analyses that do not fit into the batch system.

WHAT THESE TEMPLATE SCRIPTS ARE AND WHAT THEY DO

This is a set of scripts that is designed to facilitate second-level analysis across beta (COPE), or contrast images from a group of participants. It’s particularly helpful for signature-based analysis of group data, usually starting with beta images (one image per subject per condition) produced by first-level GLM analyses. It assumes that you are starting with Analyze (.img) or NIFTI (.nii) files from a first-level analysis, and that these images are in MNI space.

Think of it as a framework that standardizes variable names and file formats, and makes it easy to run analyses and save HTML reports without writing a bunch of custom code.

There are four kinds of files in the batch system. prep_[1 2 3 etc.] scripts set up data structures and files and need only be run during initial setup (once) Scripts named a_ b_ c_ etc. run analyses and print reports using the prepped files.
*z_batch** scripts run sets of other scripts. Those with “publish” in the filename generate HTML reports. *plugin_** scripts are for internal use and keep the code clean. You should not need to edit these or run them directly.

The philosophy is to have scripts with standardized variable names and minimal editing required to adapt them to a new dataset.

Also, these scripts include ‘batch’ scripts that run analyses and save HTML files with results and images, storing a time-stamped record of your analysis.

In principle, you should only need to edit two scripts to customize the analysis for a new dataset:

Then the rest should run correctly, for most datasets.

QUICK START: SETTING UP A NEW ANALYSIS FOR A NEW DATASET

This section describes how to set up and prep an analysis, in 12 steps.

First, make sure you have the CANlab_help_examples and CANLab_Core_Tools repositories on your matlab path:

Once you have the tools installed, you are ready to set up a new analysis.

This saves files that are re-loaded later and used in analyses. Other “prep_*” scripts can be run, too, including a script that loads behavioral data.

After you have run these, you are ready to reload your saved files and generate results, tables, and HTML reports.

This runs the data-prep process and saves a date-stamped record, with plots, in ‘MASTER_FOLDER_NAME/results/published_output’ 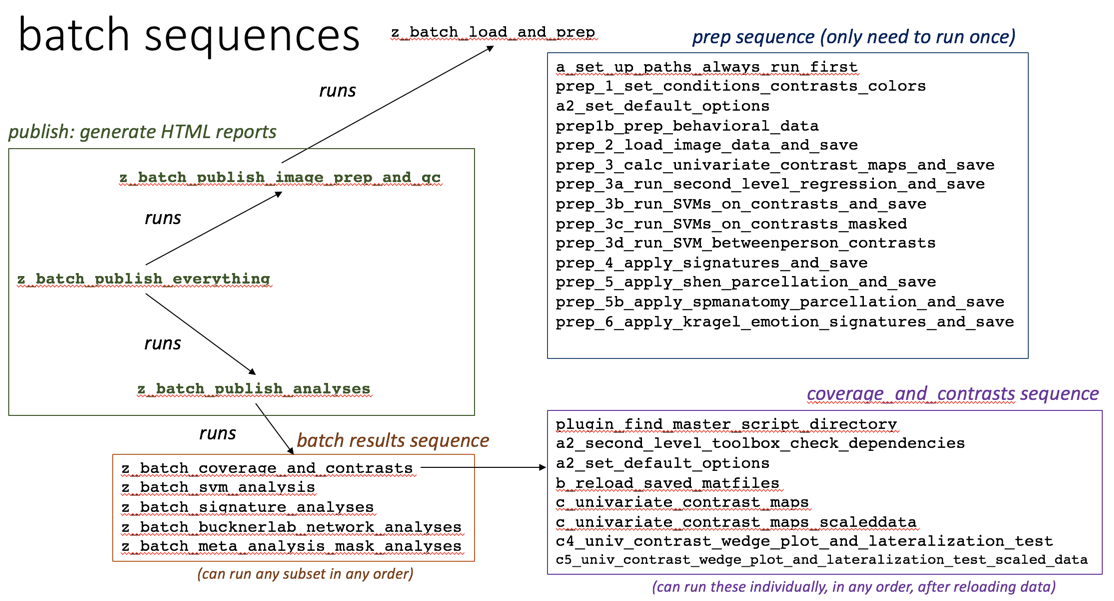 OVERVIEW OF SCRIPTS IN THE FOLDER AND WORKFLOW

This section contains a more detailed overview of the workflow, and the various scripts you will run to prep the analysis and generate results.

Step 1: Create a main analysis folder MASTER_FOLDER_NAME and navigate there

Step 2: Edit these files in you local analysis folder and save:

You only need to run this once if it runs correctly. Relevant info is extracted from images and saved in standard variable names for reloading and results-on-demand later.

An alternative, once you feel comfortable with the setup, is to run a batch script with this sequence. All scripts with ‘publish’ in the name print date-stamped HTML reports.

Always ‘set up paths’ and ‘reload’ before you do anything else. After that, these scripts should (theoretically) be runnable in any order to generate figures and tables of results. The scripts use simple commands and are designed to be guides for you to add your own custom scripts if you want to, and to pick and choose for your study.

Think of them as a menu of items that you may want to run. Batch scripts (below) run collections of these scripts and group them into published HTML reports.

For all the scripts below, you can run them ‘out of the box’ without customizing them for your study, as long as your prep_* scripts have run correctly and you have reloaded data with a_set_up_paths_always_run_first + b_reload_saved_matfiles

These run and save reports in the ‘published_output’ subfolder in your analysis directory This allows for archiving and records of the analysis history.

This batch script allows you to run a menu of different sets of results (contrasts, svm analyses, signature analyses, etc.) in any order: z_batch_publish_analyses.m

This batch script runs both the data load batch and all results: z_batch_publish_everything.m

These batch scripts are run in ‘publish’ scripts. You can run them on their own, too, but ‘set up paths’ and ‘reload’ first.

(See the canlab_batch_flowchart image above.)

MORE INFO ABOUT HOW FILES AND VARIABLES ARE STORED